Classic – With a Twist 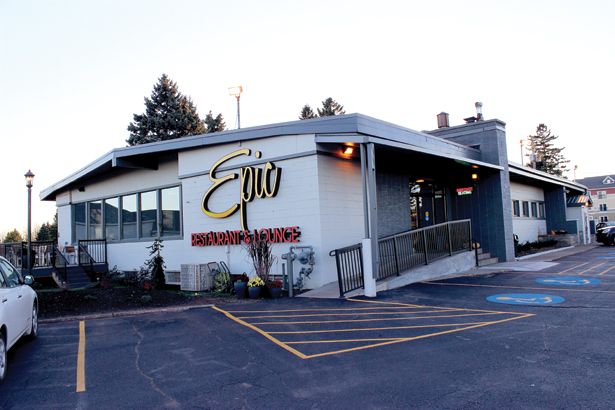 For over a decade, Mark Casper and Kyle Torvinen talked about how fun it would be to own a restaurant in Superior together that brought a new dining experience to the area. It was something they were passionate about, but they knew they needed the perfect location.

After all, this was going to be a labor of love, given the fact that the two men already worked full-time-plus jobs. Torvinen is a successful and busy attorney at the Torvinen, Jones & Routh law firm, while Casper already owns Keyport Liquor, Restaurant & Lounge.

But when Joe Hear announced that he was going to retire and close Joe’s Pagoda Chinese Restaurant, they knew their opportunity had come knocking. “When we learned about that location, we knew that we were done talking about it and that it was time to move on to opening a restaurant,” said Torvinen.

As for why the former Pagoda’s location at 3223 Tower Ave. was the right choice, Casper says it checked off many items on their wish list. “It had already been a restaurant for years, so it had the backbone we needed,” he said. “It was in a good location with good traffic flow. The banquet room was a nice feature. We always knew we wanted a place with a lot of parking, and this location has a ton of parking. It was just a good fit for us.”

“When we learned about that location, we knew … it was time to move on to opening a restaurant.”
– Epic Partner Kyle Torvinen

It also has a rich history in the region. The building has been a restaurant for more than 50 years, first as Cronstrom’s Supper Club. It later became Hunan Gardens and then Joe’s Pagoda – and, as of June, Epic Restaurant & Lounge. The Epic team is excited to carry on the location’s legacy as a great dining destination.

Today, Casper, Torvinen and Hear are business partners. Torvinen’s wife, Shelley (who is also an attorney by day), is serving as Epic’s general manager. “I worked in restaurants throughout high school, college and law school and always enjoyed it,” she said. “I then married a guy who dreamed of owning a restaurant, so I guess I got into the restaurant business by chance and choice. I absolutely love it.”

Before the team officially opened the doors for business, they gutted the entire location to create an open, welcoming and truly elegant dining environment.

“We wanted a casual, elegant feel,” says Torvinen of the remodel. “We didn’t want it to feel super high-end. But we did want to create a different dining atmosphere – casual enough so that anyone would feel welcome, but that had a sense of elegance to it.”

The building has been a restaurant for more than 50 years, first as Cronstrom’s Supper Club.

They definitely hit the mark. One of the first thing guests experience when they walk in is a wine room stocked with 400 bottles of wine in a temperature-controlled setting. From there, the restaurant flows into an open, inviting space that can easily seat more than 120 people. During the summer, a 700-square-foot wraparound deck provides additional seating.

The team worked just as hard to create an ambitious, diverse menu that features a wide selection of entrees and beverages.

“Our menu is American-style food with an upscale feel,” Casper said. This includes a wide range of menu items ranging from traditional burgers and salads to the area’s only lobster roll. But regardless of the menu’s diversity, one common thread is a commitment to making items from scratch and utilizing local ingredients when possible.

“We have a lot of different sauces and seasonings,” said Casper. “All of these we make from scratch.” And that includes everything – right down to homemade soups and even their ketchup.

“Our chefs … are always experimenting with flavor to create something that’s unique.”
– General Manager Shelley Torvinen

“Our menu is one of a kind,” noted Shelley Torvinen. “Our chefs love to find new things to put on the menu. They are always experimenting with flavor to create something that’s unique.” There are primarily three chefs – Dale Wosmek, Daryl Howen and DJ  Johnson – working on menu items. “It’s a team effort. They just have really creative minds and a sense of how flavors blend together to create some unique flavors I don’t see anywhere else in the area,” she said.

Customers’ favorite dishes are as diverse as the menu. “Our Cobb and Asian Steak salads are popular, as is our Prime Rib Grinder for lunch,” said Shelley. “People love our Epic Burger and our steaks are very popular. I’ve also been told we have the best prime rib in the area. I don’t think there is a thing on the menu I don’t like!”

Other fan favorites include the Cedar Planked Salmon and Cowboy Rib Eye. The food is paired with a large beverage menu that features 25 different beers on tap, including selections from Bent Paddle Brewing Co. of Duluth, Castle Danger Brewery of Two Harbors and other local craft brews, as well. There is also an extensive and creative cocktail menu. While the cocktail menu is always evolving based on the season, a recent favorite included a smashed pumpkin martini.

Dennis Kempton, a local foodie and the editor of Zenith City Style, recently reviewed Epic after dining there twice. He describes the restaurant as “brave and notable” in its offerings, also writing:

“Our menu is American-style food with an upscale feel.”
– Epic Partner Mark Casper

“The restaurant simultaneously blends in with the conservative uptick in quality we’re seeing with the emerging sophistication of the local restaurant scene… “ Kempton also commended “Epic’s gentle push on the palate for local diners, while soothing their familiarity and desire for craft brews and reasonable quality and priced wines.” He concluded “This Superior locale is definitely one to put on your foodie list. If risk-taking and forward thinking for the city of Superior were the aims of this restaurant’s owners, I’d say the vision and the payoff were equally successful.”

The restaurant utilizes locally produced ingredients when possible, such as tomatoes from Bay Produce in Superior. As for why, Torvinen says a commitment to buying local also makes good business sense.

“We use locally sourced or locally supplied items when possible. We get our support from local customers, and it is a way for us to do business with our customers,” he said. “It just helps the local flow of commerce.”

The Epic team hopes to tap more into the business community in the future. This includes offering what they consider the best happy hour in town. “The price and atmosphere combined is what makes it great,” said Shelley Torvinen. With $5 appetizers and drink specials from 3 to 6 p.m., Epic provides a welcoming, relaxing place for businesspeople to host their clients, or for networking.

Another draw for the business community is the recently-renovated banquet hall, which can seat 120 people.

Another draw for the business community is the recently renovated banquet hall, which can seat 120 people. A full bar and menu is available in the banquet venue. While the Epic staff anticipates that it will be a popular winter spot for holiday parties, it also makes a great meeting space. The remodeling project included the addition of a large-screen television and projector, along with the capability to configure this space to accommodate whatever type of meetings businesses might be holding.

The staff is also looking at offering a series of unique events to take place in the banquet hall. “We’re in the midst of planning beer pairing and wine pairing dinners, which is unique to our area,” Casper said. They’ve also had interest from some of the local theater groups to start hosting potential dinner theater parties at Epic. Be sure to visit the Epic website (epic.restaurant) for more information after plans are finalized.

Even though the business is still in its infancy, community response has been overwhelmingly positive.

“We’re doing really well. We have a lot of repeat customers saying this is their new favorite place, along with a lot of newcomers saying they’ll be back,” said Shelley Torvinen.

The restaurant utilizes locally produced goods when possible, such as tomatoes from Bay Produce.

“We couldn’t be more pleased with the response,” Casper said. It has been very good. I thought we’d be well received in our community; I’m just happy we’re living up to their expectations.”

And it’s easy to understand why the community is responding so positively. The Epic Restaurant & Lounge is clearly a labor of love for this team of professionals, as well as a fulfillment of a longtime dream. It shows through in everything they do – from the moment you see those first bottles of fine wine until you’re done enjoying some of the best food in the Twin Ports.  P.S.

Beth Probst is a freelance writer based in Iron River, Wis.