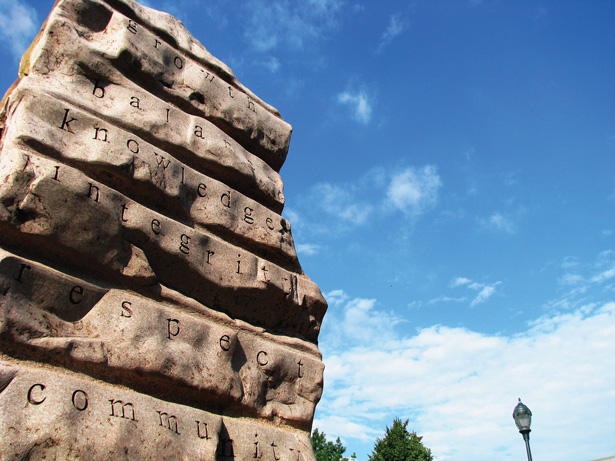 Two technical college students, with aspirations to be administrative assistants, wanted to see the transcription offices on a spring visit to Essentia Health-St. Mary’s Hospital in Superior.

Terry Jacobson obliged. The Essentia Health administrator took the Wisconsin Indianhead Technical College students to a vacant first-floor department where a dozen Essentia employees used to bustle in cubicles and offices as they moved doctors’ notes and recordings into patients’ paper medical files. But with the recent transition to electronic medical records, the department has been mothballed in a consolidation with other Essentia operations in Duluth.

“That was an example for me and an eye-opener for them,” said Jacobson.

The example was how firsthand understanding of evolving employment needs in the workforce can better help tailor the education students receive.

“Things are changing so quickly that I think you have to keep that communication open among educators and employees,” Jacobson said. “Someone can enter a three- or four-year program, and that program can look markedly different from when the person started to when they ended.”

WITC, the University of Wisconsin-Superior and the Superior School District are increasing their efforts to better educate students to meet the needs of the business community.

Bob Meyer, president of WITC and chairman of NorthWERD, was part of a similar group during his time at the University of Wisconsin-Stout. Meyer saw the need for it in the Northland and acted on it because of the potential and the results of the program in Menomonie.

“Things are changing so quickly that I think you have to keep that communication open among educators and employees.”
– Terry Jacobson, Essentia Health-St. Mary’s Hospital

“It was very successful in articulating economic development initiatives and priorities, which translated for the educational partners into responsive programming,” Meyer said. “I saw real benefit in that.”

NorthWERD began in concept at the Lake Superior Technology Conference in Ashland in August 2009.

“All the partners in the room that day were very dedicated to seeing it happen,” said Meyer. “We all have special niches. The overall philosophy there,
really, is a genuine enthusiasm, to be quite honest, that I don’t see in other parts across the state. I think there is a genuine interest in trying to help the region move forward and working together. I really feel that.”

NorthWERD will have working groups on four subjects. The first two are articulation (the ability to transfer credits to other schools) and supporting economic development in providing new programming that businesses need. These two subject groups will look to create synergies, Meyer noted.

“This is the opportunity to … do it in cooperative programs and leverage our resources to do something together that we wouldn’t be able to do alone,” said Meyer.

“The overall philosophy … is a genuine enthusiasm, to be quiet honest, that I don’t see in other parts across the state.”
– NorthWERD Chair Bob Meyer, Wisconsin Indianhead Technical College

The next two subjects are research and communication. NorthWERD will evaluate existing and emerging markets to determine trends and then develop a website to show research and explain the programs.

“All of that can enhance economic development, so it’s pretty exciting stuff,” Meyer said.

Areas to be considered to enhance economic development are renewable energy and sustainability as well as health occupations. Through a one-year plan to conduct market research, NorthWERD will work to determine, “What is going to be needed to be put in place?” said Meyer.

Some programs won’t need to look far. As soon as Kestrel Aircraft Company announced it planned to bring design, manufacturing and hundreds of jobs to Superior, WITC and the company soon began meeting, said Kate Dougherty, a Kestrel spokeswoman. The routine meetings have been to identify the company’s needs for future workforce skills.

“They are going to have some unique needs,” Meyer said. “I think there is all sorts of potential for new programming.”

One possibility is in composites, which are the plastics that form the skin of the aircraft, Meyer noted. Dougherty said all partnership options are currently informal and preliminary.

NorthWERD wants to be ready.

“What we have is the ability to more nimbly identify what is emerging in the economy in workforce needs and match our programming to address those needs,” said Meyer.

An example is WITC’s welding program. With booming natural gas and oil exploration in the Dakotas and Wyoming, demand for technical workers is high. WITC has “nimbly” responded with “welding boot camp to get potential students introduced to that very rapidly to get them up to speed quickly,” Meyer said.

What They Want to be When They Grow Up

One Superior High School student knew she wanted to be a nurse, so she thought the requirement to explore a career of your choosing was “stupid” and a waste of time.

The student grudgingly went on a job shadow. She found out that, “‘Eww, I could never do that,’ ” recalled teacher Mike Matejka, who oversees the Senior Projects Program. “Her idea was that she wanted to help people, but there was no way she could deal with the blood and guts that a nurse has to deal with.”

“Those students get in and see a real workplace and spend some time with people doing what they might be interested in and understanding some of the requirements.”
– Mike Matejka, Superior High School teacher

That’s an example of the Senior Projects Program, a graduation requirement since 2006. One option in the program is to put in 20 hours learning about a career. This program provides students with an educated opinion regarding the all-important next question: What do I want to do after high school?

And about half of students find out what they had in mind isn’t what they want to do anymore.

“Those students get in and see a real workplace and spend some time with people doing what they might be interested in and understanding some of the requirements,” Matejka said. “That’s one of the things that we’ve tried to do: make the requirements a realistic experience.”

“We all remember it … looking for our first job: ‘I can’t get a job without experience and where do I get the experience if you don’t hire me?’”
– Bob Fuhrman, Bong Veterans Historical Center

Fuhrman goes to the school to review final senior projects and leaves thinking about savings.

“I leave saying that these kids just saved themselves thousands of dollars and years of work to find out in this project that they need to go in a different direction,” Fuhrman said. “Or you get the kids that say, ‘It looked kind of interesting,’ or ‘Oh, now I know I want to do this!’”

Chicken or the Egg

“We all remember it from when we were looking for our first job: “I can’t get a job without experience and where do I get the experience if you don’t hire me?” Fuhrman said.

UW-Superior’s internship program with the Bong Veterans Historical Center and other institutions has helped solve that conundrum. About five students in the public history program have interned at Bong. The students learn research and interview skills with primary sources and experience in a public history institution.

One student decided to interview his boyhood barber.

“The guy had been cutting his hair since he was a little boy,” Fuhrman says. The student said, “ ‘I knew he was in the service, but I had no idea what his background was.’ It really opened up his eyes to the history that is out there. The history that is between people’s ears just walking around us.”

The result is that students, through initiatives such as the UW-Superior internship program, gain some critical real-world experience before they apply for their first job.

“That is what’s so critical with internships,” Fuhrman said, “at the college level or for those working on career exploration in senior projects at Superior High School. It’s really practical for these kids to get the initial exposure – where they can go to the next level and say ‘I know what these people do day-to-day. I’ve got something on my resume. Maybe it’s not the longest resume, but it does show I know something about this field.’ You can’t put a value on that. It’s the intangible that gets the kid his first job.”

Dale VanErt is uniquely suited to work between the education system and the business community as liaison for the Technology to Workforce Initiative. He has 17 years of experience in technology education and 13 years of expertise as an engineer and marketer.

VanErt, now “retired,” will turn his attention to working with the Superior-Douglas County Area Chamber of Commerce and the school district to identify business needs and curricula to meet those needs. Introductory meetings will soon commence.

In two years, VanErt wants be able to say “How we’ve been successful at supplying entry level workforce [to businesses], and how we’ve been supplying students ready for further education to tech colleges and universities. That we have ongoing partnerships in place with them and our students are an integral part of their organization and their organization is an integral part of ours.”

“It all comes back to helping the community with good employees,” Meyer said.

And he described how that’s already being done better than other places. At WITC, about 90 percent of graduates are placed in jobs within six months.

Meyer added that the Federal Reserve Bank of Minneapolis stated that if Minnesota and Wisconsin could match workers to the technical skills needed in businesses with available work, unemployment could fall more than two percent.

“There’s the skills gap we are trying to bridge,” Meyer said.

The desire to stay in the Northland, according to Meyer, is there. He cites that 70 percent of graduates stay in the area and that 85 percent remain in Wisconsin.

That wasn’t always the case.

Essentia Health’s Jacobson, a proud 1978 UW-Superior graduate, says he would meet old classmates at 10- and 20-year class reunions. The classmates had to relocate to more regional urban areas to find jobs, he noted. And they would say, “‘What I wouldn’t give to be back in Superior,’” said Jacobson.

Now, when WITC students come to  St. Mary’s Hospital in Superior, they hear about the plethora of available careers.

“It’s an eye-opener for a lot of people,” Jacobson says, “on what they could do right here in their hometown.”  P.S.